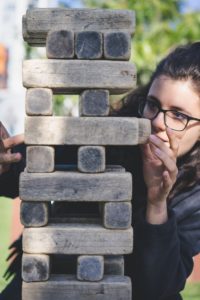 It’s in our nature to make mistakes, notably in everyday life. We pour the wrong drink, utter an incorrect word and leave the house without an umbrella. We get unintentionally overcharged, on the wrong bus and pregnant – though not usually all on the same day.

Generally, we greet these mistakes with understandable emotional responses, typically ranging from almost undetectable mild annoyance to life-changing heart-struck regret.Yet, we are increasingly told that our natural responses won’t do.

There’s a growing movement that’s advising us to do something different – namely to embrace our mistakes and even cheer them.That’s the advice in numerous books, articles and slogans from, among others, many consultants with a background in performing improv comedy.

Whether it seems like an attractive or a bizarre idea, it’s certainly contentious. What might make the idea attractive? I suspect it’s that we are capable of imagining these responses to the scenarios above:

We all like a happy ending; the more unexpected the better. So, there are good intentions behind the advice, which in the world of improv is mostly applied to the very low-stakes set of mistakes made when making up scenes on stage or in warm-up exercises.

The good intention is to improve performance by creating an impression to the actors that whatever they say or do on stage is okay, which will help them to relax. By reducing the stress associated with the possibility of making a mistake, fewer mistakes might result. It’s possible to go even further and gain exceptional results by eliminating the concept of mistakes on stage entirely. Everything is an ‘offer’ or a ‘gift’. And it’s plausible that this is one route to reducing that stress.

At the same time, many performance groups are now retreating from the ‘embrace all mistakes’ stance, as they realise that some offers are offensive, particularly if the actor fires a gender-sensitive, shaming or racial trigger. Scenes should not go there, and such mistakes are no longer welcome.

And there are plenty of other reasons to reject the Mistakes Mantras – especially outside the relatively safe confines of the stage or the practice workshop.

The idea of ‘embracing a mistake’ is to generate a positive emotional reaction, which risks neglecting a mistake’s unarguable value as an emotional guide against doing the same, mistaken, thing again.

Any wholesale reframing of ‘mistakes are welcome’ is cutting across how people actually tend to respond and so can invalidate perfectly legitimate thoughts and feelings.

I don’t like making a mistake in a pub quiz or mental arithmetic test or when sending out dates for a webinar. But I like even less being asked to applaud those mistakes. And if I make a mistake in a workshop, rather than have the group explicitly note it, I prefer my nanosecond of private dissatisfaction from which I can easily move on.

I suspect for every workshop participant who loves having a mistake applauded – ‘how unusual, how liberating, at last I’m being recognised!’ – there are a dozen who respond to such whooping artificiality by never returning. And that’s a shame because all that recognition of each individual’s value can easily be brought out by appreciation of their other (not-mistaken) contributions to an event.

MORE THAN ONE WAY TO GET GOOD INTENTIONS REALISED

Some want the mistake to represent (in the words of one recent improv book), ‘a potential for exploration, creation, laughter and humanity.’ All good stuff, up to a point – the point being where we abandon any consideration of the negative impacts of that mistake.

While aiming to avoid repetition of mistakes, we can still easily recognise ourselves as human (fallible) and laugh at a mistake (if it’s not too serious, illuminates through silliness or if enough time has passed). And we can use the occasion of a mistake for exploring a better way to do something (exploration, creation), if we wish.

But the bigger point is, we don’t need the occasion of a mistake to do these things. Nor might mistakes be the best moment to choose. If only because being mistaken tends to render us temporarily less confident and resourceful.

How about a more useful principle along the lines of; ‘When something worthwhile or unexpected happens, use it as a prompt for reflection and learning’?

There are lots of times in improvisation workshops, shows and in life itself where that could be a handy proposition, without losing anything that the embrace-mistakes-merchants would want to be available as a benefit to us – whether an incident is a mistake or not.

Stage improvisers argue that mistakes are welcome because they lead to better scenes. Successful scenes built on mistakes depend on an improv player’s commonplace skill of making the best of a mistake, which is probably a good strategy on stage. That is because accepting a mistake in the sense of incorporating it into a revised developing picture means it no longer has a damaging effect and allows a smooth(ish) continuation of that scene. But how significant are these occasions in the overall scheme of things, and how much of a ‘gift’ (dramatically-speaking) are these kinds of mistakes?

One mistake described in this same book – Life Unscripted, written by accomplished improviser Dan O’Connor and psychologist Jeff Katzman – involved one performer getting a name wrong, prompting another to incorporate the mistaken name into the ‘reality’ of the scene. That’s actually not much of a gift from a drama perspective. At best it’s an invitation for the improviser to show their recovery and glossing skills, which of course can be impressive, turning the error into a ‘gift’.

This distinction of being a gift or not from a dramatic perspective may be important. In the best improv I’ve seen, from short-form sketches by the Comedy Store Players to long-form drama from TJ+Dave, Neil+1 and Dummy, mistakes are not a significant part of the performance. These top performers build their shows by ‘yes-and-ing’, being quick-witted, dramatically true to character, deploying a well-developed sense of structural shape, and by applying many other improvisational and drama-related virtues. Obvious mistakes (forgetting a mimed item of furniture or the precise location of an exit, mis-remembering a name) tend to be temporary blemishes or spoilers. The show is not improved by them making a thing of an entrance having moved (glossing it with some implausible explanation) or how the character is sometimes known by another name.

It may be that when facing a choice between overlooking a trivial mistake and making a thing of it, overlooking is a better tactic, both on and off-stage. Our ‘woo-hoo’-ing consultants, though, are committed to calling them out. That leads them to over-rate the skill of adapting cleverly to a mistake, to the point of neglecting consideration of the worth – in drama or in life – of several of those more significant skills I mentioned above. That really is a significant cost for those who promote the ‘mistakes mania’ and ‘failure fetish’ that has infiltrated our profession.

Importantly, the skill of the improviser-as-quick-recoverer is not something to promote or teach as an off-stage application if – for example – you want people to admit to mistakes in an organisation in which admission can lead to improvements. Hospital policies are full of such examples. In those settings, which are a much more common paradigm than the rarified world of consequence-free entertainment, the system benefits from quick and candid admissions of mistakes, so they can be mitigated against and avoided in future. A good system encourages admission by minimising blame and lessening any fear of admission, perhaps even by rewarding it, while using that information to fix any systemic surroundings that prompt such mistakes.

It may not sound so catchy, but ‘celebrate appropriate risk-taking’ is better advice than ‘’celebrate failure’ and will accomplish all that these consultants and trainers desire.