Confession: I’m a very average sportsman. Playing football at university, I was a regular in my college first team in my first year, then regressed steadily through the 2nd eleven in year two to the 3rds in year three. There’s a small prize on application if you recognise me in this vintage picture of The Queen’s College 2nd X1.

Nonetheless, I’ve remained active especially with racquet sports through the decades and I’m sure I’ve also spent more hours watching football on TV and as an occasional season-ticket holder than in any other leisure activity.

Meanwhile, we’ve all noticed how sport is a major industry, dominates entertainment and interfaces with politics. We deploy international bans and boycotts to shame regimes, while the ownership of Premier League teams sanitises despots.

So I was intrigued to attend ‘The Power of Sport: A conversation on the importance of sport to Oxford’, organised by the university’s SDG Impact Lab:https://sdglab.uk/events/the-oxford-sport-development-evening-panel-discussion/

The exceptionally-accomplished speakers illuminated the value of both grassroots and elite sport participation. And rather than pitting these two as competitors for funding and facilities, they positioned them as a continuum. ‘Sport for all’ in the shape of more players means more events, more coaches and more competition to raise standards. There’s a bigger pool in which to find and develop elite talent. And everyone benefits physically and socially from improved health and well-being.

That synthesis was dramatically captured as a strand in Lam Joar’s story of extremes – escaping from war-torn South Sudan, then leveraging his sports excellence in big games in a refugee camp in Kenya to reach athletics finals at the Olympics, followed by an Oxford research post.

With similarly compelling contrasts, Pete Reed told us how his sport – rowing to three Olympic Gold medals – created the character and habits to sustain him through the paralysing spinal stroke that’s put him in a wheelchair. He spoke eloquently of the dedicated sportsperson’s ability to suffer daily, to deal with not being good enough and not being the best, but to keep trying anyway.

Perhaps because of the extraordinary personal stories of the panellists, the conversation underplayed the quotidian enjoyment in sport itself, in which playing to play is probably more rewarding than playing to win.

My Philosophy course taught me to reject mind-body dualism, so it’s no surprise that I find holistic activity – such as an hour of tennis with my son – to offer a reliable route to flow. With warm-ups, mini-games and perhaps a climactic match, we set ourselves appropriate levels of skill-building and feedback-laden challenge. That’s a different type of sport to a high-ambition, relentless pursuit of goals with gruelling training regimes.

With my passion for improvisation and play, I’d be a good example of how access at university through official and unofficial channels to squad training, squash courts and even brief tasters of hockey and canoeing, nurtured sports as part of a lifetime’s wellbeing.

That’s one of the ambitions of the university’s sports strategy, which may well also explore ways for Oxford to draw on its rich traditions of Boat Races and Blues to compete harder for talent via sports scholarships with the US universities. There’s perhaps an ironic recognition that sporting achievement is more highly rewarded – in prestige and cash – than academic, these days. 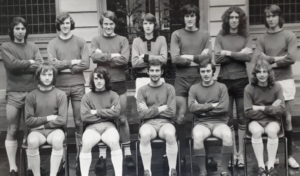 Introduced by Professor Irene Tracey: Warden at Merton, Professor of Anaesthetic Neuroscience, and nominated Vice-Chancellor of the University of Oxford.

Moderated by Oliver Cook: competed at last summer’s Tokyo Olympic Games for Team GB, a former student at Christ Church with a first class degree in history and currently the programme manager for the Oxford SDG Impact Lab.

Professor Heidi Johansen-Berg: Director of the Wellcome Centre for Integrative Neuroimaging (WIN), has tested how physical activity influences brain development and ageing and is involved in grassroots football.

Lam Joar: Current student at Oxford studying for an MSc in Refugee and Forced Migration Studies. A refugee himself from South Sudan who was an athletics coach and an assistant to the Olympic Refugee Team at last summer’s Olympic Games.

Commander Pete Reed OBE: Three-time Olympic Champion in rowing and Royal Navy Commander who studied at Oxford from 2003-05, and who suffered a debilitating spinal stroke in 2019. 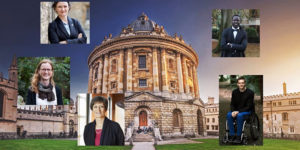