Playing to play – on and off the sports field

One of my favourite tenets of Applied Improvisation (AI) is ‘Play to Play’. It reminds us that most people play most games to win – which, to be fair, is inherent in the nature of many games. Take for example the Cricket World Cup or Wimbledon. But it is also – or even instead – possible to play to learn or play to play (for the sheer enjoyment of the activity), both in games and in life.

To be an improviser is to be playful.

In a recent talk in the UK, Inner Game maestro Tim Gallwey cast fascinating new light on the issue of play by raising the perennial – though seemingly unrelated – existential question: ‘Who am I?’

He suggested that there was no need for a person – a sports star, for example – to identify with being their tennis game, their cricket game, or being the best at something. Rather, we can think of ourselves as a human being playing football or tennis.

You may or may not be a champion, but even if you are you don’t have to make ‘being a champion’ your identity. There are other aspects to anyone’s life beyond the one or two activities which dominate their time or exemplify their expertise.

Both Roger Federer and Novak Djokovic mentioned after their fierce 5-hour marathon of a Wimbledon Final that it was back to being a dad and a husband.

Your enjoyable participation no longer depends on whether or not you are a winner or the best. You are instead, for that moment, a player. And, to return to our opening tenet, there are many ways legitimately to play 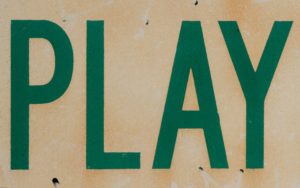 Gallwey’s sporting insights produced another wonderful parallel with AI – in our concept of ‘Inhabit the Moment’, the idea of remaining ‘Here and Now’. Tim remarked that in sport,

‘It’s not possible to correct the last shot’

You can’t correct your last shot in cricket, for example. It’s already happened; if you are out, you are out, and it’s on the scoreboard. Same in golf, too, of course. Instead, following a poor shot, the best thing is to stop thinking about that shot. Your best strategy is to inhabit the moment as you begin your next batting innings, or tee up for your next golf swing, and focus on this – current – shot, for which you will, in the uncertainty that is the nature of sport’s critical moments, have a go.

Give it your full attention in the moment, trusting yourself to do what you know how to do. It’s a waste of time at that moment to be drawing attention to mistakes or to analyse what you previously did wrong.

Likewise, leaders need to be comfortable with uncertainty, dealing with matters in an ever-emergent present, rather than diluting their attention by dwelling on a previous mistake or catastrophizing about future outcomes.

What helps you to stay in the moment and play to play?